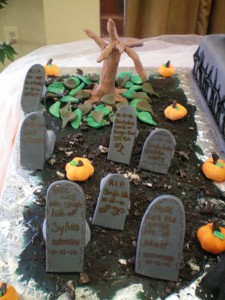 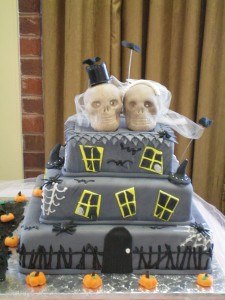 In honor of Halloween coming up next weekend, here is a cake for everyone to enjoy.  We made this cake for Matt and Sylvia’s wedding on October 31, 2010.  They were getting married at Harbour View in Woodbridge, VA and wanted to play up Halloween.  Matt and Sylvia thought about a large pumpkin-shaped cake, but then wanted some spooky elements to it.  After a few sketches, they decided they really wanted a haunted house cake.

The week of the wedding, the designers set off making some figurines for the cake.  There was to be no ordinary topper, a haunted house cake needed two skulls on top.  Once the skulls were formed, the eye holes were cut out to provide a surprise later on.  We also made a top hat for the groom and a veil for the bride.  A black cat was added, as were lots of little spiders, some pumpkins, bats, dying tree and tombstones.

On the morning of the wedding, we cut three square cakes and stacked them together to form the house.  Each tier was covered in the marbled gray fondant.  Once we had the cake covered, we were ready to add all the design elements.  We started off with layers yellow and black fondant to mimic windows.  A black door was added so that we could pipe a rickety black fence around the entire house. We then piped some cobwebs for the spiders to rest on.  For the top tier, we cut out little shingles and overlapped them to give the house little more texture.  Once the cake side was done, we worked on the grave site next door to the house.  We used chocolate crumbs to mimic dirt and worked on some witty tombstones.  Some of them included “Here lies the single life of Matt”, “Bachelors could no longer find Sylvia”, and “RIP Single Life”.  We added the tree with all of its leaves on the ground.  Once we got the cake on-site, we added the skulls on top with little lights behind them so that their eyes glowed!  It was very cool.

Have yourselves a fun and spooky Halloween.  We have plenty of fall sugar cookies to help you celebrate.  And I offer up a special treat for everyone this week – look at our Facebook page to find out what it is!